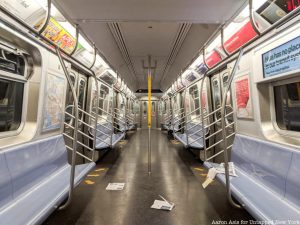 “They that give up liberty for a little temporary security, deserve neither liberty nor security” — Benjamin Franklin

New York City Police have began doing random bag searches at subway stations. The goal, of course, to avoid a London like event here. Sounds reasonable of an objective enough. But does it really make any sense?

First off, for those of you who don’t spend much time in New York City, let me tell you something about the folk over here. While we may have a very diverse population, there’s one thing everyone has in common: we are impatient. New Yorkers are always in a rush. We don’t like to wait for anything. Even when we have no where to go, we’re in a hurry. If you ever tried to walk down 7th avenue at a slightly slower pace you’ll know what I’m talking about. Everyone will either walk or push by you. So, how can anyone really expect New Yorkers to spend a few valuable minutes of their time to get searched.

Not to mention everyone in New York is carrying a bag. Either going to work with your suitcase, shopping carrying your bought overpriced crud, or a tourist with your camera bag and fanny pack.

To top it off the system is horribly flawed. The bag searches are completely random. Only some will be searched, and if someone refuses (you have the right to refuse, at least the Patriot Act hasn’t completely killed off the 4th amendment) you just simply are not allowed to ride the subway. So, imagine if a terrorist were to actually try to get on a subway with a bomb, they more or less likely probably wouldn’t even be searched. And if they were, they could simply refuse and try again later, or walk down the street to another subway station.

I’m not saying an attack is inevitable and therefor we should do nothing about it, but what about spending the money that these searches are costing on something that might actually stop terrorist attacks. Like how about more intelligence, that’s always a good thing. Or how about giving it to Sally Struthers so she can feed those starving kids? At least then we’d actually would know we were doing something to save lives.

The simple fact is that there is no single simple solution to this problem. Just throwing a table with some guys at it in a subway station will create nothing but paranoia and annoyance. Everyone needs to take a step back and actually think for once, then perhaps we be able to come up with an actual solution.