It might be the most famous picture in presidential campaign history. In an effort to look stronger on defense, 1988 Democratic Presidential candidate Michael Dukakis took a ride in a tank with the press watching. But, with his oversized personalized helmet and goofy smile, people instead likened it to a kid playing army man. The Bush Sr. campaign was quick to jump on the imagery  for their TV ads: 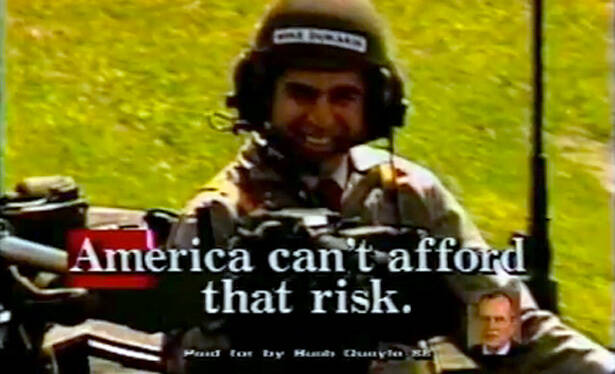 While it’s probably safe to say this tank joy ride didn’t single handily kill Dukakis’ chances at victory, the fact that Bush was riding the coattails of the extremely popular President Reagan at the time was more of a factor, it didn’t help. 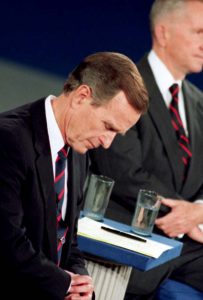 Four years later President Bush would provide the Clinton and Perot campaigns with his own poorly received image. During a townhall debate between the three, Bush seemed uncomfortable conversing with the audience. This was conveyed perfectly by a photo taken of him looking at his watch while a question was asked, as if he was anxious to get out of there.

Juxtaposed with Clinton, who shined when talking to people, this was a bad look for Bush and made him look out of touch or uninterested in what the public had to say.

This was made worse, when in an attempt to do his own publicity photo, he didn’t seem to have any idea how groceries were commonly bought at the grocery store. The New York Times reported:

“Then he grabbed a quart of milk, a light bulb and a bag of candy and ran them over an electronic scanner. The look of wonder flickered across his face again as he saw the item and price registered on the cash register screen.”

Bush was quoted as saying he was amazed.

However, the truth on the subject wasn’t so cut and dry. The technology was new, as the register contained signature forgery detection, the ability to weigh produce, and could read damaged/torn barcodes, features less common at the time. The register was being shown off by NCR, a major cash register manufacturer, and Bush could have also just been being polite to them. Whatever the case, it further cemented the idea that he was out of touch with the American people. That coupled with recession plaguing the country was enough to cement his defeat (Perot taking away some conservative votes didn’t help either). 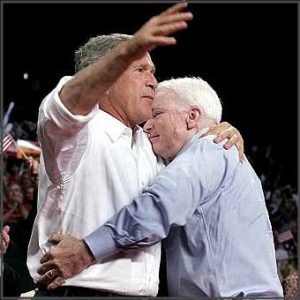 Fast forward to 2008, and the next Bush: George W., is hugely unpopular. He isn’t running for president this time, but the Obama campaign is determined to tie him together with the guy who is running: John McCain. Hence the fortune of having the picture on the right at their disposal.

The picture of McCain awkwardly hugging Bush Jr. was the perfect pictorial representation the Obama campaign was going for. McCain might not have been a huge fan of Bush since 2000 when George’s campaign spread false rumors of him fathering an illegitimate black child during the primaries, but his policies would have been similar… and at some point McCain liked him enough to give him that very very awkward hug.

Now we come to Andrew Cuomo, the current governor of New York. Cuomo became very popular during the pandemic for his daily matter of fact PowerPoint presentations. He’s had some problems along the way. People who think, wrongly, that COVID-19 isn’t a big deal obviously complained about him all the time, calling him King Cuomo because he wouldn’t let them go to the movies or whatever. Then there was the more serious complaint that he made nursing homes take patients with COVID, no doubt causing many more deaths. To be fair to him he was going by the knowledge that was available at the time to come up with that policy, but then he lied about how many really died, changing the books to reflect how/where these people died. Unlike the lies that President Trump told that resulted in more people dying of the virus, Cuomo’s were after the fact so at least he has that going for  him. Still inexcusable because, you know, lying is wrong, but his approval rating remained high.

Then the sexual assault allegations started. Cuomo’s seemed to be mostly him asking some very inappropriate and creepy questions to female staff. Not good stuff for him, but it’s not like politicians haven’t recovered from this type of thing before, allegations against Donald Trump and Bill Clinton were much worse, and they still got elected.

But then a third allegation against Cuomo came. This time the woman says Cuomo put his hand on her back. After pulling away he seemed agitated and grabbed her by the cheeks, and asked to kiss her. Pretty creepy stuff. Again, not as bad as what Trump has been accused of, but this time there was a picture: 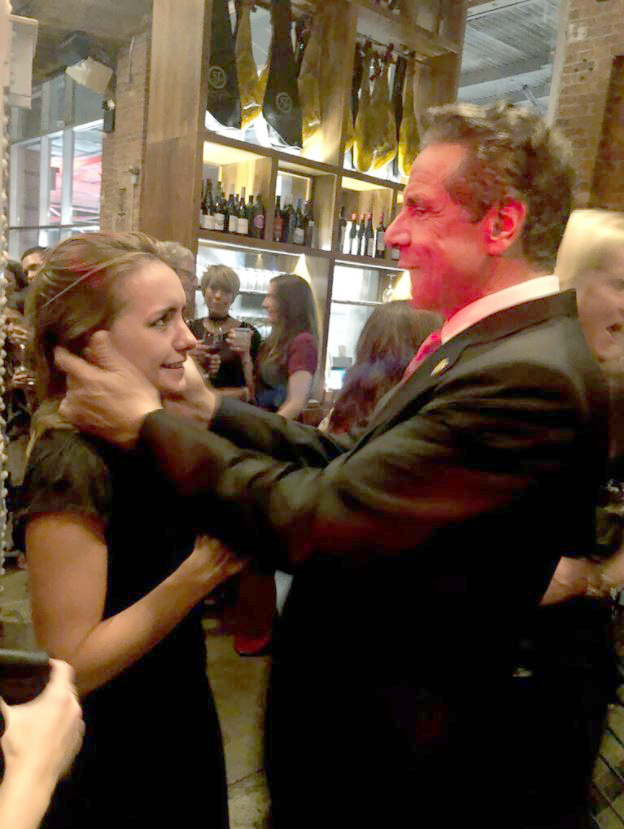 Yeah, nothing about that photo looks great. You can expect to see this photo in every ad for any person who ever runs against Cuomo for any position. Even though Trump is on tape bragging about grabbing women in inappropriate manors against their will, he was not visible when saying it. It wasn’t something that could play easily in a campaign ad or in the background while pundits talked about it on a 24-hours news channel. This image works easily for either of those scenarios.

Will Cuomo overcome this and have is political life live on? It’s possible, Biden had some creepy looking photos of him hugging women from behind, and he prevailed. But both would be better off if they had just, you know, acted like adults and treated everyone with respect.