With Biden in the Whitehouse there has been an expectation of the minimum wage being increased, possibly to $15 per hour. Is that a good amount, too much, or too little? It depends on who you ask, and whoever you do ask will probably give you an argument based on politics rather than anything sound. So, lets forget the politics for a second and look at the numbers. They say the numbers don’t lie (not always true, but we’ll try to be as factual as possible).
First, let us look at the increase of minimum wage by year:

In 1956 minimum wage was increased to a dollar for the first time (which was also my weekly allowance as a kid in the 1980s, I think my parents may have been shorting me here). In 2009 it was increased to $7.25, where it still stands today.
So, okay it has increased 7-fold, that sounds like a pretty big increase. But what if we use the inflation calculator to adjust those number in 2021 dollars: 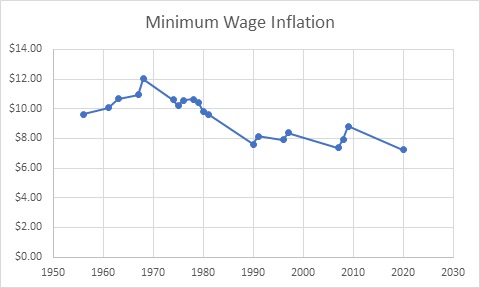 Adjusting it that way, we can see it reached as high as $12.03 in 1968 and has been a mostly downward slope since then, plummeting almost 50%. So that isn’t great.
Let us go even further though. Minimum wage is often referred to as a “starvation wage.” Is that true?
What really matters isn’t so much the wage, but what can you afford to buy with it. Well, first lets look at what might be most surprising: college tuition. It is another hot topic in contention lately, with many calling for student loan forgiveness.
Well, college tuition has in fact increased, going from an average of $18,000 in 1968 to $48,000 in 2020. That’s a pretty hefty bill. But, minimum wage has actually increased by a larger percentage. Here’s how many hours you’d have to work to afford school: 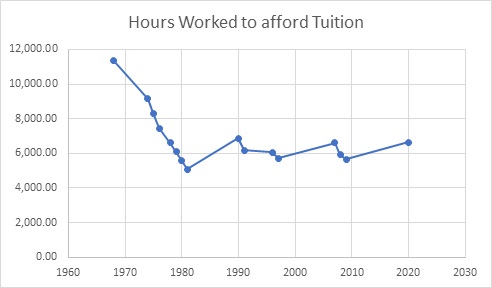 In 1968 one would have had to work over 11,000 hours to afford tuition, whereas that is now 6,641 hours. That is close to half, which is actually a lot better than I expected, but still is pretty bad because you would have to work 127 hours a week to accomplish that… 127 hours, besides being a movie that James Franco actually thought he was going to win an Oscar for, it is also probably not a feasible number to hit while also going to school full time.
What about housing, you need to live somewhere right? Okay, let’s look at how many hours you would have to work to buy a house: 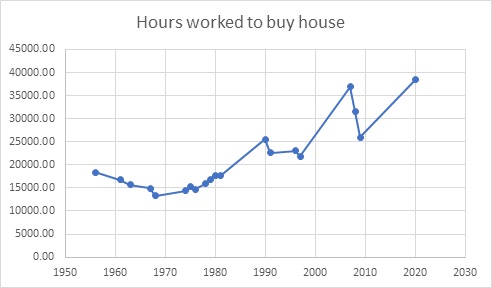 That has tripled. In 1956, you would have to work 11,337 hours to make enough to buy the average home. Now that number is 38,430 hours. That is over 18 years if you choose to work just 40 hours a week. Again, keep in mind that’s if it was the only thing you were paying for during that time.
But, hey, perhaps you would say that not everyone needs to own a home, it is just the American dream. Go rent an apartment. Okay, how many hours would you need to work for that? 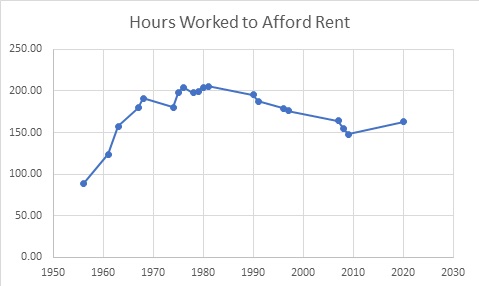 In 1956 the average rent was $88, being that minimum wage was $1, that makes it easy to figure out you would need to work 88 hours to pay rent for the month. In 2021 average rent is $1,180 a month. A minimum wage employee must work 162 hours for that, or 4 weeks at 40 hours per week, which would be the entire month basically. I hope they were not planning on any other expenses like health insurance, or taxes, or food.
Speaking of food. How has that increased. Let’s look at the good old price of bread: 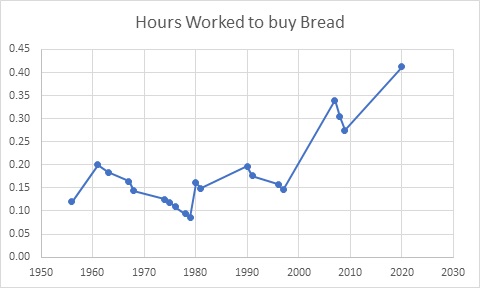 In 1956 a person making minimum wage could buy 8 loaves of bread with an hour’s wage. Not bad. In 2021? Just 2 loaves. I think that’s a pretty good representation of how much groceries have increased in cost.
Why bread, why not? It’s a staple of every kitchen. Maybe next time I’ll do frozen Elio’s Pizza.
Finally, we must dispel one of the most prominent myths out there that the only people benefitting from an increase to $15 per hour would be teenagers working at McDonald’s who don’t even really need the money. That they’re just earning some extra money so they can buy a new skin for their Among Us game.
But no. The average age of the person benefitting would be 36.
The misconception comes from the fact that 50% of the people who currently make the current minimum wage of $7.25 an hour are indeed teenagers. If someone makes $7.26 an hour, they no technically are no longer making minimum wage and therefor not included in that statistic. A lot more people are making below $15 an hour now.

Here’s a nice little infographic from Economic Policy Institute regarding this: 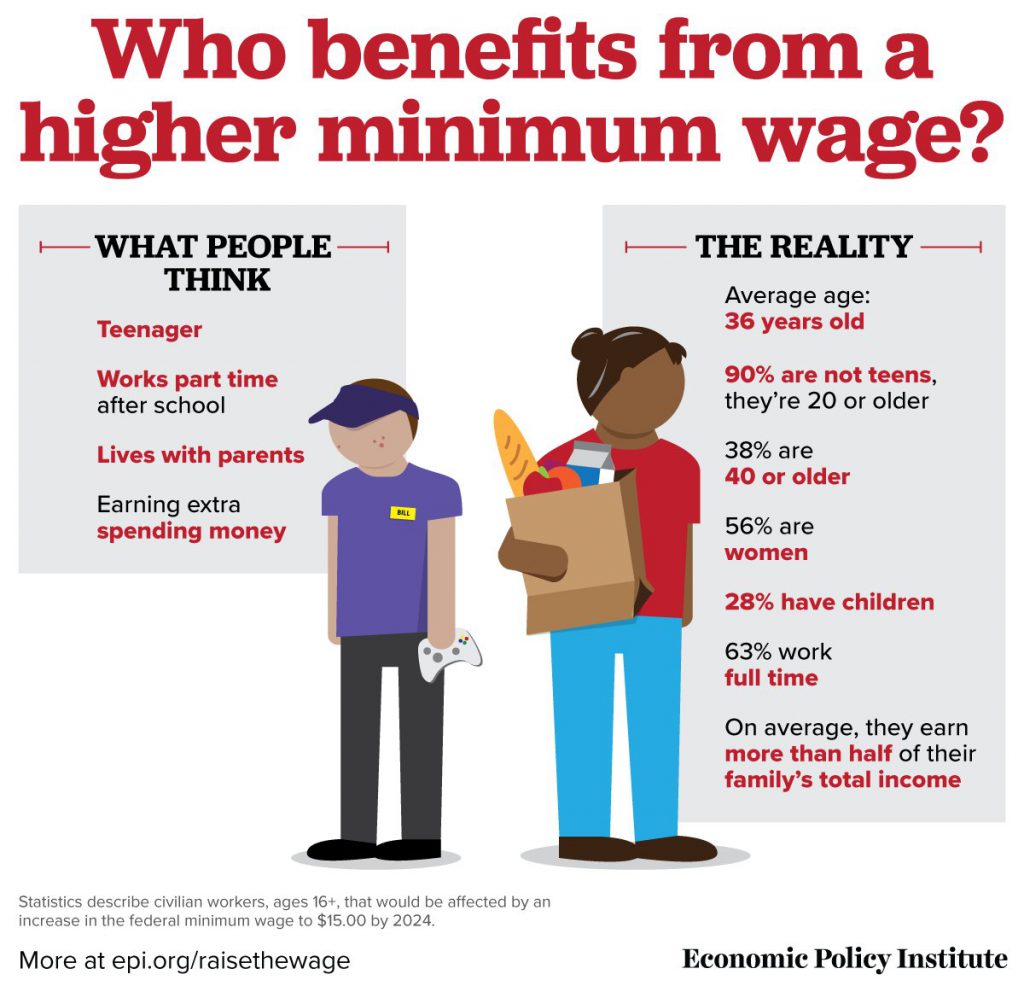 And if you’re curious what it’s like to live on $15 an hour as opposed to the current minimum wage, it would decrease the amounts need for average rent from 162 to 78 and allow you to buy over twice as much bread. It also will decrease the amount of people depending on government assistance, which means the money could be used to lower taxes or fund other programs like health insurance, although knowing the United States government it would probably be used to buy more tanks for the army that they won’t use.