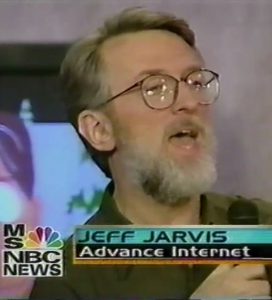 Season 24 of South Park officially starts on the day this is being posted, March 10, 2021. That’s a very  impressive run, one only a select shows have come close to: Law and Order: Special Victims Unit, Family Guy, Gunsmoke, and of course The Simpsons. While mounting up those years, South Park has gained critical praise for it’s satirical look at everything from politics to themed Mexican restaurants.   But it wasn’t always that way.

In 1998, less than a year after it’s debut on Comedy Central, South Park was quite controversial and quite a convenient subject for news shows to take advantage of. It was the, “Won’t someone think of the children” story of it’s time. MSNBC was no different, airing a special called “Shockwave” all about controversial TV and dedicating a 10 minute plus segment on South Park.

“It is adult off color humor under the guise of a children’s television show and that’s the entrapment,” said William Baker who was the president of a local PBS station and member of a panel on the show, “Most parents I know are working, and the television is present in the home and becomes the babysitter.”

Of course Mr. Baker ignores the fact that the show was on at 10pm (which was pointed out more than once before he began talking) and most likely would mean both parents would not be working at that time, and probably would have put smaller kids to bed already anyway. The whole segment also seems to ignore the V-chip that was already a thing at time that simply would have blacked out the show because it was rated TV-MA.

Maybe more amusing is TV Guide critic Greg Fagan who predicts that South Park was already running out of gas and would basically be forgotten about. Of course, South Park is doing fine and it’s TV Guide that is now irrelevant (believe it or not, TV Guide still exists as a physical magazine for some reason).

And then there’s Jeff Jarvis, who is known now as a blogger and host of a web show about Google. He was there too, declaring quite forcefully that: “American’s have taste!” a few times. Then he goes on to defend Seinfeld and Howard Stern by insisting, “It’s a joke! And America’s in on the joke!”

It’s all pretty amusing to go back and look at, and I’ve uploaded the clip from an old VHS tape I had laying around so you do so: