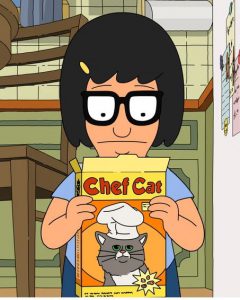 If you’ve never used The New York Times Timesmachine, it’s quite an amusing way to take a view into the past. It allows you to read editions of the New York Times going back to the 1800s. The normal way of using it is to look up how important events like the moon landing, World War II, or Watergate were covered, but who wants to be normal?

He ends the article stating that there are those that there isn’t enough hard data on how many people eat pet food. Was the consumption of kitty food what people had to resort to arguing about before the internet gave us more sound arguments, like whether or not vaccines have secret microchips that allow Bill Gates to make us hate Mr. Potato Head.

So what’s the point? I guess the article is supposed to have shocked the reader into realizing how bad poor people are living. I do have to say, growing up in poverty myself, I never personally had to resort to eating pet food because of a lack of funds or knew anyone who did. We only ate pet food for the enjoyment. Seriously though, Ramen noodles are cheaper than pet food, while not my top choice due to it being way too salty, it probably beats Kibbles n’ Bits.

The point the article was trying to make is still true today though, even more so. While poverty levels have technically improved, reaching a supposed all time low right before the pandemic, but poverty is considered $26,200 a year for a family of four, and I would love to know who the hell is surviving on that? There are still many people living too poorly in this day and age, it’s as simple as that, especially with unemployment being higher now. So please support higher minimum wages, donate to your local food bank, and  pass legislative reform to reduce the price of Fancy Feast. 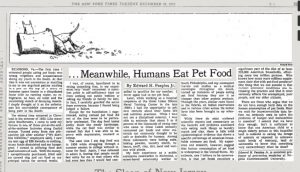