John McCain has issued a statement admitting he was wrong in accusing the White House of lying about Benghazi. I wonder if John McCain gets tired of conceding to Barack Obama.

Mitt Romney was recently spotted pumping his own gas. Sure, now we’re probably all feeling bad for believing he was just like us, but realize this: He was filling up with Ultra Premium! That rich One Percenter! Just spending an extra 25¢ a gallon like it’s nothing. I bet he super sizes at McDonald’s too.

All November we are remembering the past 15 years of our existence by reposting our favorite crap. 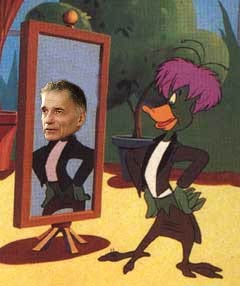 “I’m currently mulling it over,” Nader told us from his tree fortress, “Running an unsuccessful presidential campaign is hard work. But if the people want me to fail, I feel I have an obligation to do so.”

Ralph Nader has run for the last 24 presidential races, and has lost all of them. He is just three loses away from setting the record for most losses, a record currently held by former Met loser Anthony Young. Close friends of Nader have spoke of his desire to obtain the record.

“He use to want to win, but then he lost. So now he figures if he gets this record, it’ll be like winning,” Nader cohort Bushroot* told us.

Nader’s first election campaigns were carried out seriously, but after constant losing his views started to change. When Nader figured out winning was most likely beyond his reach, while losing most definitely wasn’t, his approach to running morphed into something more destructive.

To make sure the losing streak continued, Nader began implementing surefire ways to lose votes. During his last presidential run in 2004, Nader gave a few speeches wearing only a leather G-string, announced his support for interspecies marriage, and refused to appear on Bill O’Reily’s TV show because he wanted nothing to do with people that vote.

I’m not one for reality TV or anything on Tru TV and the fact that there is a show called Killer Karaoke makes me think that they’ve really run out of ideas. However, this clip from the upcoming show does not disappoint: