Selena Gomez won an award at a “Women of the Year” event, she just narrowly beat out her ex, Justin Bieber.

The Tesler was named car of the year by Motor Trend. Reminds me of the Academy Awards, where the top prizes always goes to things that only pretentious people have any interest in.

Google is coming out with a new notebook. I’m sure it’s nice, but I doubt it’s as awesome as the Trapper Keeper.

Today’s encore post was originally published on June 9, 2004, shortly after Ronald Reagan’s birthday. After he dies his body went on tour across the city so everyone could pay their respects, or get to see a dead body without having to trek through the woods with two of their closet boyhood friends and young Jerry O’Connell. 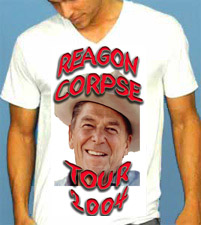 With the death of former ‘butt of jokes’ Ronald Reagan, many across the nation are saddened. Jodie Foster isn’t one of them. She’s impressed.

“I am so impressed,” Foster said to someone, I guess.

With this news John Hinckley has been released from the psychiatric hospital he was being held.

“I guess he really was trying to impress Jodie Foster. He was sane the whole time,” a doctor told us.

Hinckley is said to be doing well on his own. His first act as a free man was to purchase 32 copies of ‘Catcher On The Rye’ and was last seen giving free back massages to Fire Hydrants.

“Do you think Tony Danza would be impressed if I bit George W.?” Hinckley asked us as we were trying to casually walk by without being noticed.

Meanwhile Reagan’s corpse is taking a nation wide tour. He is currently on display in LA and will be stopping at about a dozen more venues including a pair of sold out shows at Irving Plaza in NYC.

Copies of Star Wars on VHS have also gone up in value.

Louis CK recently hosted Saturday Night Live. Most of it was typical of SNL, in other words 33% commercial, 10% musical guest, 50% boring and 7% almost kind of laughed… maybe a smile.

The highlight of the night was definetly a sketch of Louis playing Lincoln: