Well Mitt Romney has flipped-flopped again! First he said he was running for president, but today, not even campaigning. Jeez! Can you believe this guy?

How can the day after Marijuana becomes legal in Colorado not one newspaper run the headline “Rocky Mountain High”?

We still don’t know who won Florida on Tuesday night. Now that is a joke.

2012 marks our 15th year here at cheesegod. To celebrate we are presenting old stories as new. Here’s one making fun of the size of the unoriginal XBox. Here’s a fun fact: The purple box is a reference to a site called Planet Gamecube which used to have comments from the editors of the site on the bottom of each of their stories in a similar style. 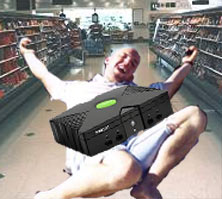 A man was killed yesterday when an X-Box video game console fell of a store shelf and crushed him.

The console, which weighs an estimated 200 lbs. and is about the length of five Mattel Electronic Football fields, was on the top shelf in the video game aisle. The X-Box must not have been properly balanced because it fell without notice onto the individual.

Experts are calling this the worse video game related disaster since the Mortal Kombat wars of 1995.

“This is the worst video game related disaster since the Mortal Kombat wars,” said one such expert, “This is almost as bad as the time in 1989 when that guy played Tetris for 87 hours straight, went insane, and killed 50 people by throwing blocks off the Empire State Building.”

Many consider the X-Box the most dangerous system (one teenager called it “bas ass”), but the worse may yet to come. Microsoft has already announced the “Y-Box” as a follow up. It will weigh about twice as much and, according to Bill Gates, “will probably be better as far as graphics and stuff go too.”