Tomorrow is election day. The Day after tomorrow we wake up with the mother of all hangovers hoping we don’t wake up with something we’ll regret.

Hurricane Sandy may have an impact on the election. This will be the biggest impact a Sandy has had since Sandy Duncan revolutionized the ability of middle-aged woman to play little boys.

Many people in the Northeast may be unable to vote due to the polling places having no energy. No energy? Sounds like Obama in the first debate!

As part of our 15 year anniversary celebration, here is an article originally published March 2nd 2002. Back then the idea of watching a movie on your cellphone seemed kind of unlikely. Also, a joke is made about not using cellphones as phones. That seems true for a lot of people these days.

NEW CELLPHONE TO HAVE DVD PLAYER 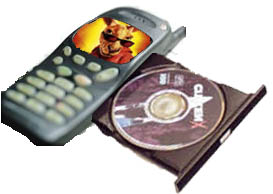 Ericson announced the first cell phone to have a DVD player in it last Friday.

“It is so exciting,” exclaimed Paul Ericson, some guy who I assume had to do with Ericson phones seeing as their names matched and he was talking about one of their stupid phones, “finally Americans can watch movies on their cell phone.”

The DVD feature will enable people on the go to watch movies. Car drivers will be allowed to watch DVDs too, as long as they don’t use their hands.

Unfortunately a bug in the design has caused the phone unable to make calls at any time.

“We don’t think it’s a big deal that the phone can’t make calls,” said Ericson, “very few people buy cell phones to make calls. They buy them for the games, organizer, crazy ring tones, and most importantly, to look cool.”

Look for the phone on shelves this month.

Tomorrow, November 6th I will still be live blogging the election results. However since I lost power for nearly a week, I have not had as much prep time as I hoped. I still plan on going forward, albeit somewhat scaled back.