Do 32 Texans Have Nothing Better To Do? 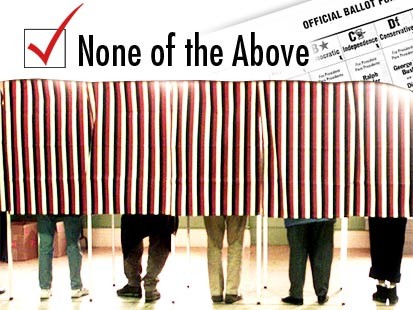 Last night before I went to bed I heard countless stories of the madness occurring at the late night caucus in Texas. Long lines around blocks, lack of ballots, places having to leave people outside because there was already so many inside they were breaking the fire code, and a general misunderstanding of how the process works. In one location they were shocked when over 200 people showed since they were only expecting 4.

With all this madness ensuing it’s no wonder that when I woke up this morning only about a third of the precincts had reported their decision. But here’s what I don’t understand, why have 32 votes been submitted so far for ‘undecided’?

Now, I don’t throw the abbreviation WTF around often, but… WTF?

You know, I can see you being loyal to your candidate of choice and braving through all the chaos to make sure your voice is heard, but undecided? That’s like spending millions of dollars for an ad during the Super Bowl only to just air a blank screen.

Meh, whatever. Whatever makes you feel good about yourself.