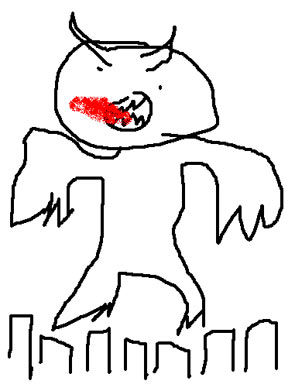 Everything that receives hype is always a let down. The final episode of Seinfeld, the 2007 Mets, the 2004 election, that peanut butter sandwich I ate last night…. So when I sat down last night to watch Cloverfield, the new monster flick from Lost creator J.J. Abrams, I wasn’t expecting much.

The hype started back in July when the first trailer for the movie showed up on Transformers. The trailer featured a severed Statue Liberty Head flying across the streets on New York City disrupting a going away party. It featured no title, just the date 1-18-08. The film was codenamed Cloverfield and for months everyone on the internet buzzed about what this movie could possibly be. Then, they named the movie Cloverfield… so that killed a little bit of excitement right there. Then posters, commercials, and anything else that you can use for advertising all seemed to feature that headless Statue of Liberty. I began to wonder if that was the only thing the movie had going for it, that they had nothing else cool to show from the movie and therefor just kept showing that one scene. Finally, when the buzz on the internet started wondering if the movie would even ever show the monster responsible for decapitating national landmarks, I came to the conclusion that this film was just a cross between Godzilla and Blair Witch. And that wouldn’t excite anyone. And, lets face it, many people have felt let down my Lost over the last season or two, so it seems Abrams would have experience in this.

But perhaps it was because I had killed all my positive expectations before I even started watching the movie is why I enjoyed it. Although Blair Witch meets Godzilla is still an accurate description, it did not suck like those two aforementioned movies.

Cloverfield, disguised as a classified government tape found in the site formally known as Central Park, is indeed a film about a couple of youngins getting their party disrupted by a mysterious monster while documenting the entire thing with a camcorder (By the way, this camcorder has to have the best surround sound I’ve ever heard, you’d think having only a singular microphone would give you nothing more than mono sound.). The camcorder gimmick gives us a more personable feel to the characters and the situation in the film, trying to make us feel like we could be right there with them and, overall, a more realistic feel to it.

The film keeps up a good amount of suspense as the characters try to rescue the main star’s love interest from her midtown apartment. Although one could argue, as I am right now I guess, that the main star in the film is the monster and the destruction he (she?) causes . The characters presented in the movie aren’t bad, but there’s not exactly anything new or overly interesting about them. The most likable character, and possibly not coincidentally, is the one you see least. Hud, the guy operating the camcorder, is kind of like Moose from the Archie comics. Although, I have not figured out why he is named after the department of Housing and Urban Development.

I will not to go into too much details, as the the makers of the film seemed to want to keep everyone in the dark about it up until now. Plus much of the movie’s suspense and action kind of rely on the “what’s going to happen next” feel. But, yes you do see the monster.

So, anyway, yes, I recommend checking this movie out. It’s a lot better than 27 dresses at least.