Selling Your Soul To Rupert Murdoch 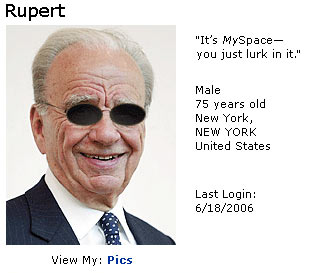 MySpace has been popular for a couple of years or so now. As it has become more and more main stream I have grown to hate it more and more.

Is it the incredibly poorly designed profiles? The badly designed interface? The fact that it’s owned by the unpropitious News Corp.? Or is it just my desire that hate everything that is popular and cast myself further and further from the mainstream?

Well, there are three facts. The profiles people create for themselves do look horrible, like some kind of hell for evil graphic designers. If they do desire to strive to make something that looks better for themselves, they’re have a pain in the ass time doing so since the ease of customization is comparable to completing Dragon Force on expert in Guitar Hero. And, yes, News Corp, owners of The New York Post and FOX news, are extremely maleficent. As for that whole thing about me hating stuff just because it’s mainstream, well, that’s just silly… ahem.

But, as MySpace has become embedded in our civilization it has become harder to function not being part of the group. Not being on MySpace is like not owning a cellphone or a car*. Sure, there are alternatives threatening MySpace’s empire, such as Facebook, but lets face it, it isn’t going anywhere too soon. MySpace is like the MP3, outdated old technology of poor quality. The only reason anyone still uses it is because they are comfortable with and everyone else uses it.

So, I’ve given up. Perhaps it’s not News Corp’s fault MySpace is full of morons who don’t understand it’s of poor design to have songs preload and play, that sixteen embedded youtube videos isn’t a good idea, and the only reason they have so many friends on the site is because all those people just wanted to have a lot of friends on their profile and will add anything that moves, or doesn’t move, as their friend.

As I told myself this, I logged onto MySpace and created a profile for myself. Now I feel dirty, so dirty. Excuse while I go take a shower.

“For a long time it gave me nightmares… witnessing an injustice like that… it’s a constant reminder of just how unfair this world can be… I can still hear them taunting him… silly rabbit, tricks are for kids… I mean, WHY COULDN’T THEY JUST GIVE HIM SOME CEREAL?”