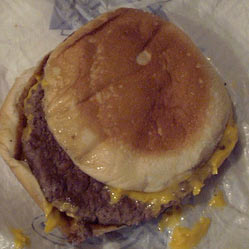 Another week, another recall. It seems these days there is no toy or no food safe enough to eat. Whether it’s finding out that the frozen pizza last night might of just given you e coli or Anderson Cooper showing off the asbestos he has floating around in his blood, everything in the media is making us scared of everything. It has come to the point where just approaching the frozen food section of Target makes me start to shake and break out in a cold sweat.

Choosing an item to eat is like spinning the roulette wheel of incurable diseases. Are Bubba burgers still safe to eat, or will I find out tomorrow that they’ve been injected with lead paint. What about Digiorno’s? Is that going to give me herpes? Maybe I’ll just stick with the White Castle, sure it’ll give me diarrhea, but at least that’s all it’ll give me… I hope.

Perhaps I’m better off just buying a cow, some chickens, and growing my own crops. Of course the ground is so polluted and the feed for the animals is probably tainted. I’d likely be no better off. That and I’m lazy. I don’t even want to clean up after my dog, forget a damn cow.

TV:
Last night’s Simpson’s opened up with a joke about those annoying TV bugs that advertise upcoming shows across the lower third of the TV screen.

It’s been done before (twice just by The Simpson’s itself, once, quite brilliantly, during the Simpson’s Movie) but never this violently. A series of show advertisements came on across the screen as Marge put a gruesome end to each, including sticking House’s Hugh Laurie in a microwave, then feeding him to Homer as part of a loaf.

I was hoping one of the show bugs Marge destroyed would be Family Guy, which featured a similar gag a couple of weeks earlier. On Family Guy, a bug for The Simpson’s was attacked by Quagmire. He raped Marge and then murdered the rest of the Simpson’s family. Nothing funnier than rape. This segment didn’t air in the US, although I hear it did in Canada. Sorry Canada.

By the way, why can’t FOX ever air the Simpson’s Halloween special earlier than a week after Halloween? Even with FOX losing the rights to half the baseball postseason this year, they still can’t seem to get this show on in time. Stupid Red Sox.

“Man, you’re like school during the summer. No class.”
-Rudy, from Fat Albert.