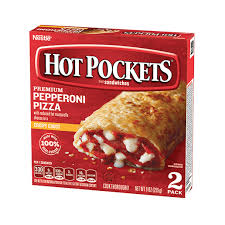 As writing this, there’s a lot of places being broken into as part of the looting/rioting in response to the murder of George Floyd and other black men. Of all the places being vandalized, none of them probably resulted in the heating of a Hot Pocket.

On May 27th a man was arrested after breaking into a bank in San Diego in order to heat up his Hot Pocket. He broke and climbed through a window near the drive-thru. The alarm company noticed him on the surveillance camera using the microwave.

One hour later the police… wait, one hour? Really? It took the police an hour to react to someone breaking into a bank? And how long was this guy heat up his Hot Pocket for? Two minutes, three if you have two, that’s all it should take. I hope the detectives on this case are consulting with Hot Pocket experts on this case.

Anyway, one hour later the cops arrested the man. When asked if the Hot Pockets were worth it, the man responded, “Hell yeah it was worth it.”