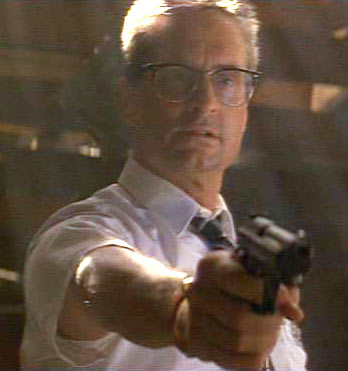 The plot to this movie has more holes than the movie “Holes”, and more clichés than the movie “Cliches” (Okay, okay, I made that movie up). I don’t think I need to go any further than pointing out it features a cop on his last day before retirement to prove my point. But, hey, this movie isn’t all about plot, it’s about the anger.

Michael Douglas plays a man fed up with his life. He’s divorced, misses his daughter, lives with his mom, and is laid off his job. Rather than take control of his life, he decides to take revenge on the small things that bother us every day. Things like traffic, overpriced convenience stores, impatient guys waiting to use payphones, racist guys that own army surplus stores, um… violent gang… hmmm. O, and of course there’s the famous “I don’t want lunch, I want breakfast” scene:

I was in Wendy’s a couple of weeks ago after they stopped serving breakfast and they still gave it to me… I guess Wendy’s is better than Wamburger.

This is less a movie, than just guy on journey to see his daughter on her birthday, getting pissed off at every little thing on the way, applying his own brand of vigilante justice where he sees fit. Who hasn’t wanted to shoot up a McDonalds or kill some mean racist guy who destroys your snow globe. But nonetheless there is some nice story in here. It’s a sad tale of a man who just quite adapt to the world. He wants to have a family again, a decent job, a normal life. But, as he sees it, everyone else is getting in his way, holding him back.
Maybe “Bad movie” is too strong, after all Ebert liked it, although not that bastard Ebert. I just can’t understand what any of it has to do with Sir-Mix-Alot: 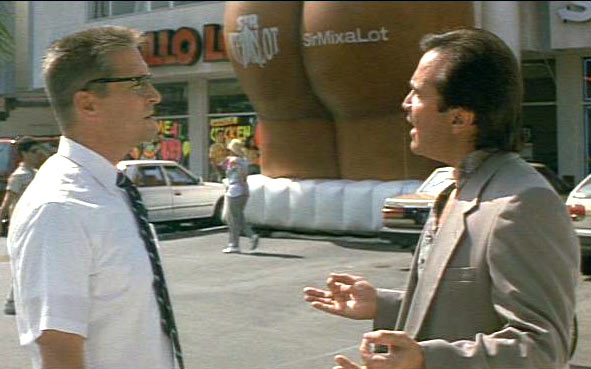