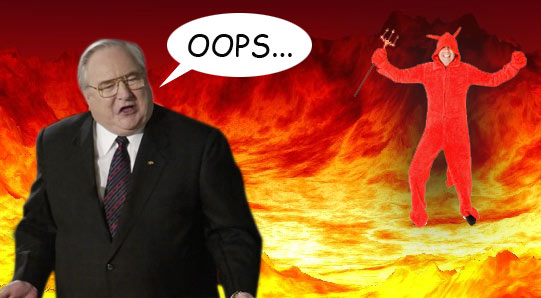 “God continues to lift the curtain and allow the enemies of America to give us probably what we deserve.”
— Rev Jerry Falwell, blaming civil libertarians, feminists, homosexuals, and abortion rights supporters for the terrorist attacks of Tuesday, September 11, 2001, to which Rev Pat Robertson agreed, quoted from John F Harris, “God Gave US ‘What We Deserve,’ Falwell Says,” The Washington Post (September 14, 2001)

“I hope I live to see the day when, as in the early days of our country, we won’t have any public schools. The churches will have taken them over again and Christians will be running them. What a happy day that will be!”
— Rev Jerry Falwell, America Can Be Saved, 1979 pp. 52-53, from Albert J Menendez and Edd Doerr, The Great Quotations on Religious Freedom

“The idea that religion and politics don’t mix was invented by the Devil to keep Christians from running their own country.”
— Rev Jerry Falwell, Sermon, July 4, 1976

” If you’re not a born-again Christian, you’re a failure as a human being.”
— Rev Jerry Falwell (attributed: source unknown)