"Dine on a Toliet" 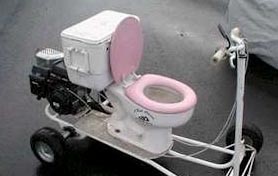 From the restaurant of the week file, here’s an eatery in China I learned about from an Indian newspaper:

A restaurant in the southern Chinese town of Shenzhen, where seats are similar to toilets and plates are designed as commode, is gaining popularity. Known for its slogan ‘dinning on a toilet’, the restaurant is decorated to resemble big lavatories, with two big toilets at the front entrance.

Customers sit on toilet like seats which are covered with colourful glass. Glass-top dinning tables are shaped like squat toilets. Lin, the boss of the four-restaurant chain, got the inspiration to set up a “toilet-themed” restaurant after visiting an exhibition in Paris on toilets.