Having Verizon Fios TV gives new options of programing to enjoy… unfortunately the “Smile of a Child” network doesn’t seem to be one of them.

SMILE is a network for children that feature “Christian friendly” programing. I often pause on the station when I channel surf, not because I’m a Christian child, but because I like to laugh at low-budget low-quality stuff. But when stopped to enjoy an episode of “Colby’s Clubhouse” I couldn’t believe what I was seeing.

When I tuned a group of kids were talking to a WWII veteran in a park… well at least a middle aged guy pretending to be a WWII veteran. After learning he was in the great war, one of the kids told him he must have had a lot of fun fighting. He told the children about how he fought for the country and saw a lot of his friends die.

To show their appreciation of his heroics they sing him a song, which includes the kids marching in place and saluting the American flag. The WWII vet is touched by their song, but unfortunately at this point a cop kicks the vet out of the park because “the park isn’t a camping ground for the homeless.” 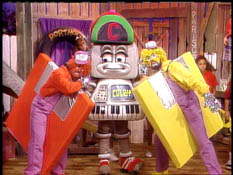 The kids go to the clubhouse to talk to Colby, who, by the way seems to a Casio keyboard with a face made out of foam rubber. The kids ask Colby why God would let a person who fought for our country to wind up homeless. Colby tells the children, all we know about this WWII veteran is that he fought in a war. We don’t know what he’s done since, or what he’ll do in the future.

So, in other words, he deserves it. Don’t question God’s way. Shut up kids, quit your whining.

Right before I flipped to the next station they decided to pray for the veteran. Better than nothing I suppose.