Something’s up at the iTunes music store… 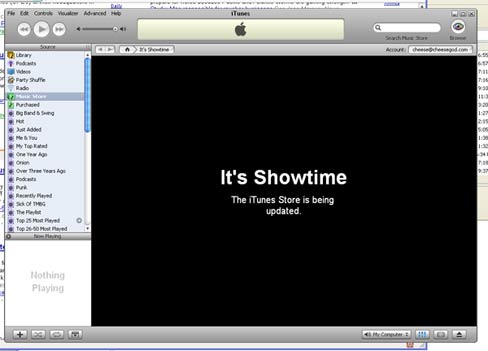 Here’s hoping for an iPod that is also a space heater… or the ability to download gumball recipees from the iTunes music store… or perhaps DRM that’s so great you can only listen to a song once and then you hard drive automatically reformats itself.

For more details, either stay tuned to this site, or go somewhere else.

And, now, here are those crazy details:

New iPods… nothing major here, now you can play games on your iPod not even worth playing on your cell phone. It has a new brighter screen, which is alright, but it’s the same size. The battery life, however, has been expanded to last 20 hours, which sounds pretty excellent.

Oh yeah, they come with new headphones now. Every headphone that has ever come with any portable player has sucked major applesauce, and I’m sure this is no different.

Somehow apple has managed to decrease the size of the nanos even more while doubling the storage capacity. They now sport different colours as well. Pretty cool looking.

iTunes 7 is actually what may be what I’m most excited about out of all this. Besides looking slightly different there are a couple of new features that makes this product worth the upgrade.

The feature you’ll hear most about on the news will be the Disney movies now for sale. Whatever. If someone is dumb enough to pay $15 for a movie to watch on a two inch iPod screen or their computer monitor then more power to Apple.

The features most worth noting are not even listed in the “What’s new” section of the help file. And, because of this, all of the new little tweaks still have not been found.

iTunes now keeps track of how many times you skip a song. This data can be used to make smart playlists so you can exclude the songs you skip most. Pretty clever.

Every time you import music now, iTunes will search for and add the album art for the songs. I’ve had mixed success with this, but it’s still a nice feature which hopefully will improve in the future.

For some reason in past versions of iTunes the visualizer would not display in your full resolution in full screen (unless, of course, you have a sucky resolution) in the windows version. Now, however, it does and looks very perty.

iTunes also has a few new ways of looking at your music involving your album art. It looks nice, but is pretty useless.

Now, to look forward to the Wii announcement on Thursday…