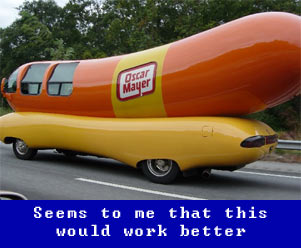 It seems Hummer knows exactly who there customers are and are willing to admit it. A new TV advert shows a man grocery shopping, apparently feeling rather emasculate decides to follow his trip up with a purchase of a new Hummer to, as the slogan at at the end of the ad states restore his masculinity. This, without a doubt, seems to confirm the popular theory that the bigger the car a guy owns, the smaller his, uh, shoe size is.

One would think that this would be a negative effect on sales. To me this ad is pretty much saying, “Hey you! All you small down there? Buy this car!” Besides avoiding sales, they’re also categorizing every current Hummer owner as also being organ deficient. I’d pretty embarrassed if I was a Hummer owner… I’m not though.

I have idea for the next Hummer ad campaign. It’ll start with a guy doing community service cleaning up a highway. Then, disgusted with having to do all this cleaning, he can go out and buy a Hummer and drive it down the very same highway he was just cleaning, polluting the air around it. It would then end with the slogan, “Restore your Assholiness”.