What the hell were we thinking: Pogs 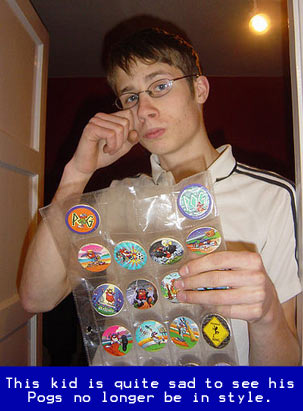 Pogs were all the craze during the early/mid 1990s. They also baffled me even back then. Don’t get me wrong, I had Pogs. Three of them. But their were people who liked to dive full force with their time and money, owning hundreds of Pogs.

So by now, if you are under the age 22 or over the age of 28 you’re probably wondering what the hell a Pog is already. Basically Pogs were small round pieces of cardboard that had pictures on ’em. Then you’d have a slammer, which was basically just like a Pog, except it was made of metal instead of cardboard. The object of the game was to flip the Pogs with your slammer. Every pog you flipped you’d get to keep. Kind of a 90’s version of flipping baseball cards, of course if there’s anyone under the age 55 here, you’d have no idea of flipping baseball cards is.

Pogs came in two qualities, cheap and cheaper. However despite pretty much just being pictures on cardboard they sold for anywhere from 30 cents to a dollar each. Some Pogs featured cool sayings as “Awesome” or “Please be kind, rewind” and others featured cool cartoon characters like Ren & Stimpy, Fish Police, or Dan Quale.

Now, I’m sure your thinking, that all sounds uber cool, but why the hell were they so popular? Well, we couldn’t bring our Super Nintendos to school with us, snap bracelets were already out and it’d still be another 5 years or so until Pokemon card would hit the scene, how else were we suppose to show off how cool we were. Note, since I had three Pogs I was quite uncool.

Don’t feel too bad for uncoolness and lack of Pogs though, a year or two after Pogs were deemed no longer cool I joined the UPN 20 Kids kids club and got a set of 6 Pogs for doing so. And hey they also sent me a “decoder card” (I guess rings were too much money to produce to give away for free at this point) which I continue to carry in my wallet to this day right next to my Kellogs Frosted Flakes Nintendo 64calling card. Now, 13 years later, Pogs can now be found for bargain prices on eBay. I say it’s time we all become cool trend setters, and buy these Pogs up and bring them back in style… C’mon! We can do it! Hello…. anyone?