I often like to read snopes.com as a time killer. The site about Urban Legends provides stories that the fact they border on the edge of reality makes them that more interesting.

I assumed that the book “Hippo Eats Dwarf” would provide similar stories. But my question is, would it provide anything I can’t already just get off the Internet, besides being neatly printed and binded together with a shiny cover. In fact, the author Alex Boese runs his own Urban Legend/Scam site, “Museum of Hoaxes.”

Hippo Eats Dwarf, which gets it’s name from one of the most popular fake news stories to constantly circulate, tends to focus more on scams than Urban Legends. Boese attempts to string all together these scams together by teaching us how detect scams. I suppose so we can all be cool scam busting sleuths such as him. But 99% of the stories in here are so obviously fake, reasons for why it’s fake are not necessary. 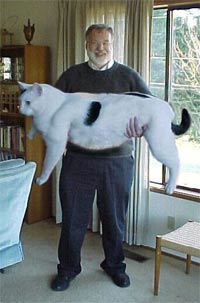 When I first saw this picture on the right I didn’t think, “Holy crap! That’s a big cat!” Instead, I thought, “Man, that’s a pretty crappy photoshopped picture.” Reading the story that goes along with it, about how the kitten was found near radioactive material and must of developed a Teenage Mutant Ninja Turtle complex just affirms that this story full of crap. Hey, they should have this cat make an appearance in Teenage Mutant Ninja Turtles where he captures and eats Splinter.

But, many believed this tall tale. That, perhaps, is the most interesting thing about any of these stories. Just how stupid and obviously fake can a hoax get and there still be people believing it. While not every hoax is so obviously fake, many are. Like, if you were to receive a phone call telling you that if you stand naked in front of your window a new satellite technology would scan you from space and give you a mammogram, would you comply, take off your shirt and stand in front of your window? Well, people did.

The book, Hippo Eats Dwarf is currently for sale at amazon.com and other places.