Roller Shoes: How to hurt your kids

Parents are funny. They’re against sex on TV. They want to ban violence in Video Games. They don’t want people to smoke in movies. But when it comes to their own children’s safety, meh… not that important. 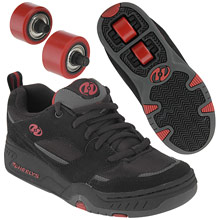 The latest trend in children’s fashions are roller shoes. These are sneakers with wheels built into the heel. This is the biggest novelty in footwear since flashing lights, but while the lights were just moronic, roller shoes are also unsafe.

All you have to do is lean back on the heel and suddenly you are on wheels instead of rubber. Some shoes do feature a button that will actually retreat the wheels from inside the shoe fully transforming it from a sneaker to roller skate, but these are unpopular and not cool enough.

As I walk around the mall, which online peddler kidzworld says these shoes are great for, I see dozens of children rolling around into each other and into my path causing me to having quickly stop in my tracks. I have to stop in my tracks because these kids are to dense to pay attention to where they are going and I don’t really know if they could suddenly stop if they were to try. It is human nature to lean back when you want to stop, however with these I’d suppose you’d have to lean forward.

Another major question: Isn’t it hard enough to keep track of your children when they don’t have wheels. Why are you making it harder for yourself? Actually, I suppose the answer to this is quite simple, parents don’t really bother at all to keep track of their kids anymore. They just drop them off at the mall Friday night with their friends and leave them there for hours with a cellphone so they can keep tabs. Unless your using that cellphone as a GPS tracker a cellphone isn’t going to tell you where your little ones are. And it’s not as if a cellphone is going to keep your kids from rolling down the steps and breaking their face.