Here are cheesegod.com’s predictions for 2006, guaranteed to come true.

1)George W. Bush will say something with incredibly bad grammar, video of it will circulate of it online for a while until he says something else dumb, and the entire process will repeat.

2)A show will be canceled, much to the dismay of it’s fans. In an effort to save the show, fans will flock to message boards and post “Burn in Hell, (insert network name here)”.

3)King Kong will be released on DVD. Much hype will be created, little care will be shown.

4)Bill O’Reily will continue to have the highest rated news program, proving it’s perfectly fine to be a poop orifice on TV, but for some reason it’s inappropriate at your 4 year old daughters birthday party.

5)An embarrassing video of some kid will be uploaded to the internet. Everyone will laugh, except that kid, whose life will be ruined and will be reduced to suicide.

6)ABC’s hit show Lost will continue to draw people into tuning every week, yet the plot will drag on and continue to go nowhere as the writers just make crap up as they go along.

7)Steve Guttenburg will not be a major box office draw.

8)Conan O’Brien will do some stupid dance that will greatly amuse his audience every night. This will continue the irony of the fact that Conan acts like a brain dead idiot to amuse actual brain dead idiots. 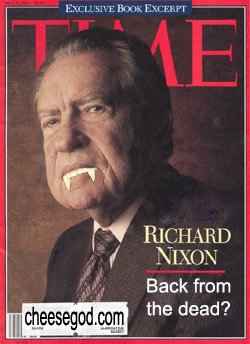 9)Richard Nixon will not rise from the dead. He will not become a brain sucking vampire. He will not challenge Al Franken to fisticuffs. He will not star in the Broadway musical Cats.

11)Apple will release some products that are cool but may have flaws. However anyone who points out one of these flaws will be labeled as a Microsoft using dumbass by Apple users.

13)Someone who was never liked much will suddenly become greatly admired… after they die.