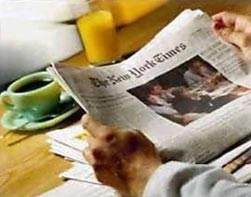 People have begun to wonder if blogs are the new venue of breaking news. Thanks to internet sites we knew about the forged Bush Military Memos and that gay bald rightwing reporter running a muck in the whitehouse. Well, now cheesegod.com has made a mockery of all of that by being added to that list.

About one week ago we “broke” the Animal Crossing anti-RIAA story. After spreading to tons of other sites from Digg, to slashdot, to joystiq, to a bunch of crappy sites not worth mentioning, it has landed at the New York Times.

Unbelievable, but true. And to top it off, despite the fact that most stories are lost to the masses when it becomes available online, cheeegod.com has received full credit. I assume Mr. Zeller did not read the story I did just days before where I jabbed at the New York Times for featuring less than important news on their cover. Of course featuring anything from cheesegod.com doesn’t exactly disprove this point.

Read the article here (Available for just a week or two before they make you pay to read it):Social Commentary, or Just a Dog’s Opinion? – New York Times