You know you live in a blue state when…

… this is what qualifies as a front cover news story: 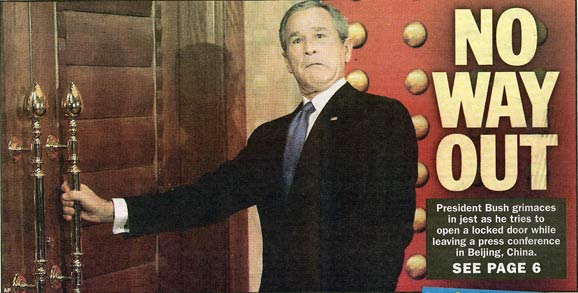 The wonderful New York Daily News seems to somehow think that this is front page worthy. Bush makes a dumb face every week, actually it’s more like every second, why is this news? It’s not. The Daily News ought to change it’s name to the NY Post, because that’s where it seems to be headed. The Daily News has become more tabloid than news, often featuring the latest celebrity marriage rather than anything actually newsworthy. I should probably be happy, this is the closest the Daily News gets to reporting real news. It’s much better than the constant headlines about their own scratch-n-win contest they run.

Gee, I wonder why I never read news about the Daily News scratch-n-win contest in any other paper. Of course their was that time that hundreds of people “accidentally” won the contest and the Daily News refused to pay out. Now that’s news.

To be fair nothing is quite as bad as the NY Post, which appears to be currently written by brain dead Nazis and is as useless as the people who read it.

Also, I hear the New York Times, which up until within the last few years was a respectable paper, featured a series of three pictures depicting Bush trying to open the door, Bush making a stupid face, and finally Bush being told the door is locked. Almost kind of like a comic strip. The NY Times never used to publish comics, but I guess they might as well do something to make it worth reading again.