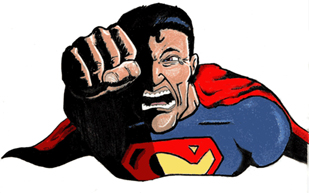 So, I just saw Superman: The Movie. Yeah, yeah. I know it came out, like, 25 years ago, but I just saw it. And after watching it I have one reaction: What the f**k.

Superman flies backwards around the earth to turn back time? What the hell?

By the way, at this point I should probably tell you that if you have not seen this movie, and plan to, you should not read this article. Actually I should probably put this before I gave away the ending in the preceding paragraph. I would go back and edit it.. but, meh.

The world spinning incorrectly could have a lot of consequences I suppose. People getting sick. The day being a little longer. But... time going backwards? No... no, no, no!

And why would time go backwards for everyone on earth, but not for Superman? It boggles the mind? How can this be an acceptable ending? It's dumb. It's plain ol' retarded. I mean what would earth have to do with the continuation of time? Does time not exist anywhere but earth? Because I can't imagine that spinning the earth would cause time to backwards everywhere in the galaxy. I mean, did time exist on Krypton? If superman flew around the earth enough times would the planet of Krypton just reappear? What the hell?