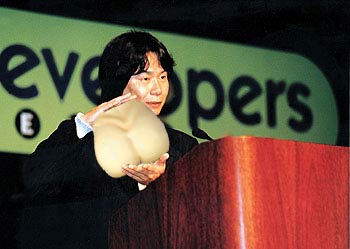 Shigero Miyamoto, creator of Mario, Donkey Kong, Zelda, Pikmin, and the goofy grin, received a standing ovation at E3 when he came onto the stage. He received an even bigger applause when announced Nintendo's revolutionary plans for the next system: Ass control.

"Too often a players bottom feels left out. It will go numb, or fall asleep, with boredom," Miyamoto told the cold of Nintendo enthusiasts, "Now, with our revolutionary controller all will see the Nintendo difference. The difference you feel when you sit."

The crowd, all Nintendo fan boys/girls who had to sign a loyalty oath before being allowed in, took well to the news.

"Oh my god! Oh my god," said one 35 year old male wearing a Pac Man Fever T-shirt. He told us his name but we decided not to print it because we felt sorry for his family and possibly and friends, if any, he might have.

The revolutionary controller will feature a two crevis designed to snuggly fit each buttcheak. Nintendo showed off a new version of bike racing game Excitebike. Depending how you lean on your butt, the character in game will respond when turning.

Meanwhile Sony announced 536 new games for the PSP, all poorly made ports of older games. Sony also addressed the battery problem of the PSP by introducing a one foot wide add on pack which will increase the battery life by 13%. Also, Sony said they will increase their warranty on the system to 45 days, but no longer saying, "C'mon, it's a Sony system! It's suppose to break!"

Microsoft, feeling left out, also introduced a new hand held, which will run Windows CE and be capable of displaying graphics similar to the X-Box. The demo of Halo 2 running out seemed impressive, but no one was able to play long due to excruciating back pain from holding the 52lb handheld too long. Microsoft plans on releasing a "strap on dolly" to help carry the load."