MP3 Player Too Small For Battery 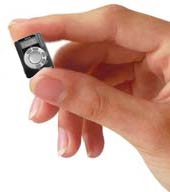 echnology is always improving. And what better technology out there right now then the mp3 player. Of course there's all those medical type equipments and such too, but this story isn't about that.

Rio used to have the overall market share of MP3 players, way back in the golden age of 1999. But then other companies started competing, and that can never can be good for business, just look at Jack in the Box. Then Apple made an mp3 player that didn't suck, and that was the end of that... but, unfortunately, not the end of this story.

Rio is back on the market with an MP3 player so small it's sure to turn heads, at least it would if it were viewable. The new Rio MP-87658.0g is not only so small it can fit inside a match book holder, if such a thing exists, it also is capable of holding 45,095,9832,125.9 songs of CD quality (this is if each song is only 90 seconds long and encoded at a bit rate of 18kps, you may say that's not CD Quality, but that's your opinion. I personally can't tell the difference between CDs and a mp3 of this quality).

A Rio spokesperson told us it also might have games you can play on it. They're not sure yet, even though the MP3 has an LCD screen, it's too small for anyone too see if games are actually available on it.

This MP3 player sounds all fine and dandy, and I highly recommend it. The only drawback so far is that it may be a little fragile. In fact, about two thirds of all players will break if you push the buttons on the front a little too hard. The player is not compatible with AAC or WMA, so if your one of those losers who actually pay for songs you download you are out of luck. Also the player is too small to use headphones with, an adapter is planned, but has not yet been released. Oh, and one last thing, I think Rio went of business years ago. << Home