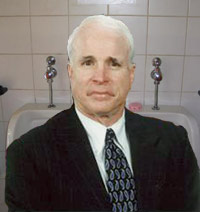 This Week the government met on many important issues such as steroids in baseball and to make personal decisions for the Schiavo family. But one of the biggest debates came earlier today as it was time to decide the menu for the congressional cafeteria.

"Well the majority of us (the GOP) think Sloppy Joes should be served on Tuesdays," Tom Delay told us, "but those liberals think we should have tacos instead, how unamerican."

Democrats argued that tacos were much more cost effective and that the sloppy joes would cost the American tax payer up to three billion dollars a year. When asked about this inflated amount Hillary Clinton told us, "Well we did say 'up to' three billion. Plus Ted Kennedy likes a lot of extra slop on his sloppy joes, and that's only going to the cost of napkins."

We than pestered Clinton for twenty minutes on wether or not she was going to run for president, because as journalists it's the law for us to do so. She then refused to give us a straight answer, also by law.

John McCain apparently hates sloppy joes, but planned on voting for them along with his party. "Well, I, support the decision for sloppy joes to be served on Tuesdays." McCain then sighed and locked himself in a bathroom stall so no one could see him cry.

Republicans warned that having tacos would cause the local Target's hot sauce supply to be depleted by the year 2026.

John Kerry argued on the virtues of tacos and the evils of sloppy joes for a full twenty minutes. But he concluded by saying it didn't matter because the sloppy joes were going to win anyway. He then joined McCain in a neighboring stall to weep.

Sloppy joes is indeed predicted by experts to win, with voting going along party lines. Another two or three days are planned however to continue the debate. A break from the lunch debacle will be taken on Monday however to argue what show is better, Desperate Housewives or Kelsey Grammar Presents The Sketch Show. << Home