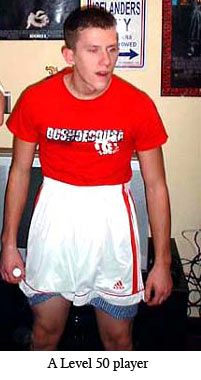 After making his triumphant goal of reaching Level 50 in the Matrix Online video game, teen Trent Abhorred has been hospitalized.

Trent was able to reach level 50 in just under two weeks by playing 18 hours a day. He was able to accomplish such extended periods of game play by continuing not have any personal life and have his mom bring his Mac & Cheese dinner to his room. Reaching the level also meant having to exploit flaws in the game that involves extreme repetition that would boar anyone who wasn't used to have a boring life already.

Unfortunately, after reaching his 25th hour in a row after repeated killing of opposing players still below level 20, he experienced blindness after accidently coming into contact with sunlight when his mom opened the Peter Pan curtains in his room.

Trent is in distress right now, worried that by the time he gets out of the hospital people will have caught up with him on the game and he will receive constant ass kickings in game just like he does in real life everyday at school.

Rumor has it Trent is also suffering from extreme butt numbness and "keyboard fingers." We, however, were unable to confirm this, because no one has actually visited him the hospital.

Yes, this story is perhaps written with hate, as my ass was kicked by a level 50 player last night. By the way, if anyone reading this actually play The Matrix Online you can still find me on the Regression server under the handle "godofcheese." Look me up.