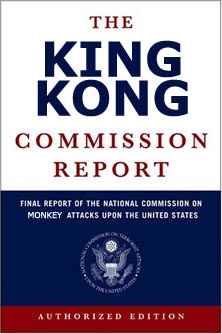 FRIDAY, MARCH 2, 1933, gave us a temperate and nearly cloudless evening in New York. Millions of men and women were getting out of work and getting ready for a Friday Night on the town. It was opening night for Carl Denham's latest Broadway Show. In Sarosta, Florida, President Franklin D. Roosevelt went for an early morning roll.

1.1 INSIDE THE MAJESTIC THEATER

At 2pm Carl Denham led the preparation of the stage for his show. A wooden platform measuring 42 ft by 21ft was built on the stage. Chains and cuffs were affixed to the wall. Two near the bottom of the platform and two higher up, approximately 29 ft above the platform.

The Monkey's wrists had a girth of 7ft, yet the cuffs made were only structured to handle up to 5ft. The cuffs were not made correctly due to proper measurements were never taken. The duty of taking the measurements was assigned to 1st Mate John 'Jack' Driscoll, but he complained of the fecal odor of the monkey and did not want to get too close. Instead he decided to wing it and 'guesstimate' the correct numbers. We believe this was the first mistake.

When King Kong was brought to Manhattan he was processed at Ellis Island, where his name was shortened from Kongopulous, and given a partial medal detection sweeping. Kong was not fully checked with the medal detector because he was to large to fit through the standard metal detector and it would of taken too long to scan him with wand. We are lucky Kong was not hiding any bombs, guns, knives, or illegal bootlegging devices in his fur.

Kong's luggage was checked and found to contain a large amount of Bananas. Bringing fruit from foreign land is illegal so Kong's luggage was rejected entry into the state. Witnesses say that this angered Kong and may have contributed to the reasoning of his rampage.

At about 8pm the theater's seats were filled and audience members began to clap together with a increasing rhythm as if doing so would begin the show earlier. The claps slowly sped up to a speed that caused the audience to lose their harmony, the audience then just erupted in cheers. This occurred a couple of times before until the show started.

King Kong was introduced and the curtains opened. King Kong stood on the platform, chained the walls. The first couple of minutes of the show seemed to go as planned. Audience members looked at the monkey and the monkey wiggled around a bit and made a few noises that sounded like a lions roar played backwards at double speed.

Then someone decided to ignore the “No Cameras/Pictures” warning that was announced before the show. An audience member took out a camera and began taking photos. Many other audience members followed suit and did as well.

King Kong, appalled by such lack of attention to policy, grew angry and broke his chains.

King Kong escaped the stage with little resistance and began to make his way downtown, crushing a few cars and eating a couple of people along the way.

Cops arrived on the scene and set up roadblocks in front of the 50ft monkey. Unfortunately, the monkey being 50ft tall, the barricades did little to stop him. Cops pleaded with their megaphones for Kong to stop, but they were ignored, most likely due to the fact that Kong was not human and therefor did not understand our language.

Some cops shot at Kong but he didn't go down. This may be due to his large size the bullets were too small to have effect on him. Or he may have been wearing body armor under his fur. Lack of proper metal detection scan earlier would allow for this to be a possibility.

Kong continued down Broadway until he spied the Empire State Building and decided to start scaling it. A couple of stories up Kong spotted Ann Dorow through a window and grabbed her. There was not bars on the window to keep out giant monkeys in place.

The building was not equipped with plastic spikes around the permitted a few stories up as recommended to keep giant mammals from climbing the building.

Mr. Kong climbed all the way up the building where he was met met by an attack by a swarm of planes. Kong tried to swat away as many planes as he could but they proved too much for him. Kong put down Ms. Dorow and plunged to his death squishing a couple of thousand people below he landed on.

We believe that Kong was not killed but rather committed suicide. He saw once he got to the top he had nowhere to go and decided to take as many as he could with his plunge. We also believe Kong's original mission may have been to destroy the building by inflicting damage towards the top of the building and make the building collapse on itself.

Reasoning For These Recommendations

The reason why we have decided to make these recommendations is to hopefully prevent any further attacks on America. Such attacks made not be a giants monkey next time. It could be anything from hijacked planes to truck bombs. Who knows, maybe the Japanese will even attack Perl Harbor in a few years.