We here at cheesegod.com have just learned the awful truth about Kerry. It goes beyond just lying about his Vietnam stay this time. It seems Kerry is actually Adolf Hitler. 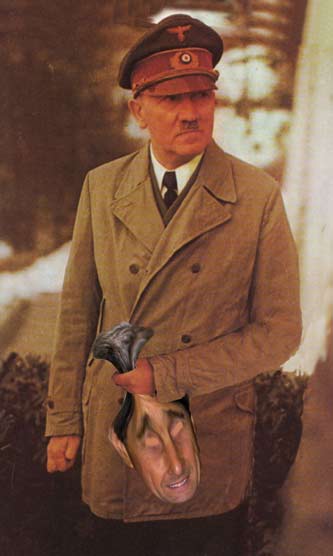 Swift Boat Veterans was the group that was resourceful enough to know about Kerry's false antics during Vietnam although they never actually were with him at any point during the war. They even seem to know better than any person that actually was on the same boat as Kerry!. Well Swift Boat has done it again with this exclusive information.

It seems Hitler never actually died during World War II. He's just been riding low for a while until now, posing as John Kerry, hoping to take over America. Kind of like how the Changelings of the Dominion posed as the leader of the Klingon empire to start a war with the Federation in order to weaken both sides before their own invasion. Of course this Klingon-Federation war won't happen for a few hudred years, but I believe it's going to happen. The source seems just as good as telling stories as Swift Boat.

What proof do they have that Kerry is Hitler you ask? Well what about that picture on the right? Also one member of Swift boat, late one night after doing some coke, said he saw John Kerry in a 7-Eleven parking lot spray painting Nazi Symbols on Trolls. Another member is also quick to point out that we've never seen Hitler and Kerry in the same place. A point made even scarier when I realized that I've never seen myself and Tony Danza in the same place at the same time, which kept me up all night wondering. Well that kept me up as well as the Fire Alarm that kept chirping because it was low on batteries. Oh yeah, and the fact that I ate 52 marshmallow Peeps left over from Easter. My stool was yellow!