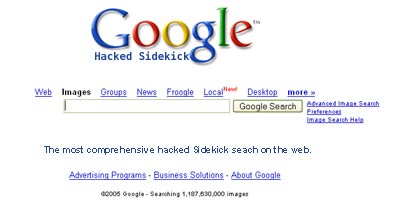 The search wars are heating up. MSN has just added Google like ads to it's seaches. Ask Jeeves just introduced a new, sexier, version of their buttler. Lycos has taken out an ad in the back of the village voice in the classifieds. And Webcrawler has announced to their own surprise that they still exist.

So what is current search king Google doing about it? Well, continuing in their tradition in introducing a new feature every month (Gmail, Video Search, Google Maps, Jock Strap size search) they have brought out perhaps the most popular one to date, the hacked Sidekick search.

With more and more people purchasing cell phones purchasing cellphones because they want to be cool like Snoop Dog and less because of useful features (like security) it's become easier to take advantage of them. With more and more sidekick becoming hacked everyday someone has to keep track of them. And that someone is Google. Or that something is Google. I guess Google isn't a person. Sometimes I wish it was. I'd comb her hair and she'd invent new ways to defrost chili.

No longer will you have to search through back issues of 2600 to find the number for Tony Danza. While most celebrities seem to hate the idea, 50 cent has already been involved in 13 shooting over the subject, some are embracing it.

"I got two phone calls today," John Larroquette excitingly told us, "that's the most I've gotten since I wrote my number on a bathroom stall. Although one call was just to ask if I had Chi McBride's number. I know him, you know. Yep! He was on my show back in the '90s. He played a janitor, I was the star! He thinks he's so big, being in I Robot and The Terminal! Well things are happening for me too! I'm currently filming a Meow Mix commercial... you don't actualy see my face, but you can see my hand open a can of Tuna n' Pork!"

Meanwhile Paris Hilton also welcomed to additional calls from men. It has allowed her to be able to complete her goal of sleeping with 536 men a week by Friday, leaving her the weekend free to attend to her other hobbies, like getting drunk and sleeping with more men.