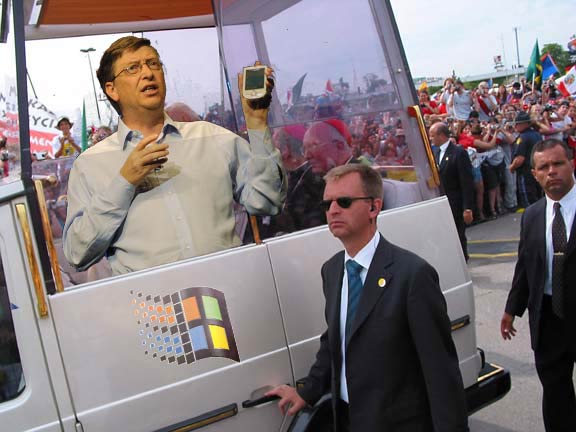 Microsoft announced Tuesday that it was unleashing an update to fix 536 more flaws found in Windows.

In an effort to fight viruses, worm, trojans, spyware, and Yahoo's march to take over the world, Microsoft unleashed 536 more patches totaling 312 gigs. The patch will take only about 3 days to download.

"Our Operating System is stronger than ever," Bill Gates told the American people from his special Microsoft made car, riding and waving to the public while delivering these words, "The more we are hit, the stronger we are."

Bill Gates offering up these encouraging words to no doubt rev up his troops in war against alternative Operating Systems.

"These other Operating Systems, Linux, Panther, BSD.. they might not be attacked by Viruses, but this because they already are of such less quality that they probably can't even run a virus," Bill Gates pleaded with the crowd, "We all know nothing good is free. So why get Linux, when you can spend you're hard earned money on Windows XP.

At this point the speech was delayed when his special Microsoft Car stopped running for no particular reason and had to be restarted.

Once the car started going again Gates finished up, "Remember folks, When you install Linux, the terrorists win!"

Bill Gates then jumped out of his car just seconds before it crashed into a wall. The car malfunction was blamed on a flaw left open that let a hacker take control.