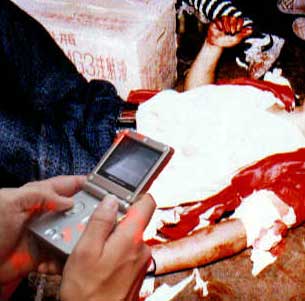 The worse Gameboy related accident yet happened earlier this week at Poky Oats Elementary School in Hartford, CT. A Pokemon game gone wrong resulted in the death of five children, one teacher, a custodian, and a Michael Jackson sympathizer.

"It was horrible," said Timmy O' Toole, age 6, a witness to the event, "There was blood everywhere. I got a stain on my shirt. My mom threw it away. It was my favorite shirt, the one with cookie monster.... don't tell her, but I took it back out of the trash when she wasn't looking. I sleep with it under the covers."

Another incident, another lawsuit. Nintendo yawned it off, giving us the usual response.

"It's a travesty and we here at Nintendo Of America express our condolences," A Nintendo Spokesperson told us, "We always have expressed safety precautions while playing with your GameBoy. A three foot distance between players and protective suits, available for purchase through the official Nintendo website, should always be utilized."

Witnesses all told of how awful the site was. Thirty three children have been taken to mental hospitals for extended psychiatric help.

"We just hope to have our daughter back by the end of the year," a parent of one of the children in the psychiatric hospital who wished to remain anonymous told us... oh, what the hell, his name was John Lindermen.

The child whose Gameboy caused the ruckus, and survivor of the event, is also saddened by the massacre.

"I can't believe it. The cops took my gameboy for evidence. How am I suppose to catch the last Pokemon, Curdle, now? I'm going try to get my mom to buy me one of those new green ones. They're cool, they're just like the other Gameboy but it's... green!

Nintendo Gameboy Advance sales have not been hurt by this last event, in fact sales have slightly risen sice this the event. << Home