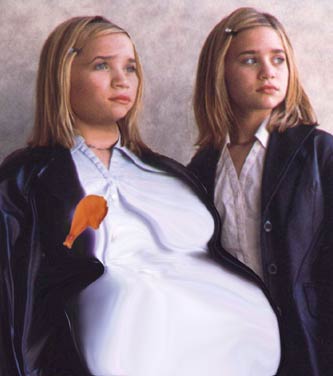 Mary Kate Olson, who had been placed in a eating disorder clinic last month, has been declared 100% cured.

Reporters waited outside on the hospital steps hoping to get a glimpse of the twin for the first time since her submission to the clinic. They were not disappointed. In fact they caught more than just a glimpse.

Mary Kate has fully returned to her natural 536 lb weight. Reporters scrambled to change over to wide angle lenses before it was too late, but were given ample time to do so when Ashley struggled to get her sister to fit inside the U-Haul they had rented to take her home in.

The appearance although short, has already started a trend with the easily brainwashed pre-teen and teen population who reportedly have been piling into Jack in th Boxes and Sambos across the nation eating the fattiest food on the menu in hoped of looking like their one of their idols. Unfortunately they are still trying to be like Britney and are wearing their prostitot gear. Low rise pants, G-strings, and 300lbs of body fat just doesn't mix.

Reporters asked for a comment from the now Roseanne shaped Olson twin. Just when she opened her mouth as if to deliver she just burped instead, causing a chicken leg to dislodge from her between her front teeth and land on her shirt.

Google searching for the "Olson Twins Nude" has gone done dramatically. But fortunately Lindsay Lohen and Hillary Duff are still high on the list giving mentally challenged men everywhere still the chance to have wet dreams about teenage girls.

The twins are planning on working on another movie soon. Rumors have it's a Marlon Brando bio pic, with Ashley playing Brando in his early years, and Marry Kate in his later. << Home