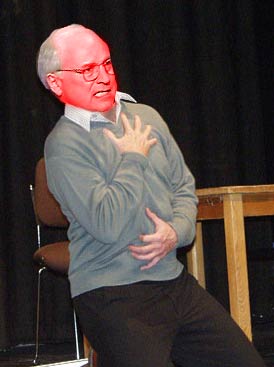 Dick Cheney found himself in the hospital with his 63rd Heart Attack in as many years Saturday after finally learning the truth about this months election.

It seems Cheney and his fellow minions had plotted for months for ways to rig the presidental election. From mailing out fictatious flyers, to warning blacks not to vote, to rigging those electronic polling machines, to bashing people's knees caps who weren't white men when they approached the polls in Ohio. Cheney thought he had sealed up the election for Bush & Co.

And everything went to plan... or so he thought. Yeah, sure, they won the election. But it was only Saturday morning someone told Cheney the truth.

Those flyers didn't work. Blacks voted anyway. They forgot to bash kneecaps. And the Bush team doesn't even know there's only one Internet nonetheless know how to rig a voting machine. Yes, against all odds, Bush won the election fairly.

This would be enough to shock anyone, but Cheney on his fifth baboon heart replacement went into instant cardiac arrest.

Democrats are already crying foul, claiming Bush is just trying to upstage Arafat. Democrats also still don't believe the election wasn't rigged. Their only argument is, "Look at him! He's a f*cking moron! Who'd the hell would vote for him." Which is a pretty valid argument. << Home