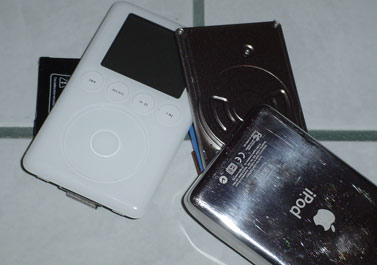 The world's oldest iPod has died at the age of 2. It's owner, George Flippant, 12 of Newark, New Jersey, hobbies include fishing and fragging, favorite Backstreet boy is the one with the hair, was deeply saddened by the unfortunate turn of events.

The iPod more than outlived it's life expectancy of 366 days (1 day longer than the included warranty) by a full year. Many marveled at the ancient technology of the iPod with it's old school tech wheel and all.

"The wheel in the click wheel actually turned instead of staying stationary. It's so 2002," Flippant's 8 year old neighbor Alexander Beef told us when we were able to distract him from his new triple screen GameBoy.

The elder iPod's life ended abruptly when it was dropped on Flippant's kitchen floor.

"It all happened so fast," Flippant told us, telling us the events of the iPod's demise, "One minute I was dancing to the new Eminem song with the iPod in my hand. I was pretending to be one of those silhouette people like in the commercials. Then the next minute the iPod has flown out of my hand and is crashing into a million pieces after hitting the floor."

Most iPods die of bad batteries, hard drive failure, or depression of a crappy music library. Not everyone believes Flippant's story.

"He just broke it cause he wanted a new one for christmas," George Flippant's sister Georgia told us, "He's always doing stuff like that. He always get's it too. Like that time he broke his arm and Mom took him out of school for two days. He was so faking it."

The police will not say if they're willing to rule out foul play yet.

"What the hell do I care what happened to some kid's walkman," Tony Putz, chief of police, told us.