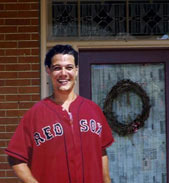 Boston Rob has begun ringing door bells to gain support to win the next million dollars.

In the major twist, that turned out be more of a slight turn, on Survivor viewers are going to be able to award a million dollars to the player of their choice. Unable to influence the vote as easily has the sheep he played with on the show he has taken to the streets to convince the American public.

"I knock on each persons door and convince them to form an alliance with me." Boston Rob told us from under that stupid baseball cap, "I tell them that if they're ever on Survivor and they have another one of these poll thingies I'll vote for them."

Rob then looked around to make sure no one was looking and then leaned in and told us, "Of course I might not vote for them, that's all up to me."

The grassroots campaign seems to be working to a certain extent, an online poll shows Rob's support has grown from 3% to 4%.

Rob's marathon had a set back when the show's main winner and now his finance had to be taken to the hospital to be treated for her badly scraped knees. It seems Amber was dragged along too many streets while clinging to Rob while he was on his campaign.

Survivor, which was renamed the Boston Rob Show about half way through this season, has never before given viewers the choice of who should win a prize. All cast members now have to plea their cases to the public for the first time.

So far, the only thing known for sure, Yankee fans have yet another reason to hate the Red Sox. << Home