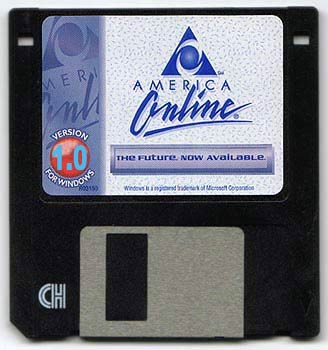 Archaeologist unearthed an AOL disc from an apartment in Queens this week. The disc is believed to date as far back as 1994.

"We still have to run some more tests on the artifact, but if it's as old as some of us suspect this could be a major breakthrough," Super Nerd Computer Historian Josh Guzzle told us.

The disc, which offers a whopping 2 hours of internet access for free, was with an A.C. Slater pepper shaker. Scientists find this of particular interest because no one has admited to liking Saved By The Bell since the early 90's, and even then...

An AOL disc that dates back to 1994 would be the oldest disc known so far. It would actually predate the great "AOL CD Avalanche" that took 15 lives in a landfill in 1999.

Historians are eager to check the disc out on a computer, but are still searching for one that still has a floppy drive.

"We went down to the high school, but they were still using Commodore 64s. Chris says he has an original iMac in his basement. We'll have to see if it still works," Guzzle told us while picking his nose, wearing taped glasses, adjusting his pocket protector, petting his calculator, and anything else nerdy you can think of, "We'll have to wear eye protection when we power up the iMac. The horrible light up colored back is likely to blind us all."

Once they have the disc running in the computer, the geeks scientists plan to on laughing at the "archaic" look and the fact people use to pay $2.50 an hour to use such garbage.

The apartment the disc was found in was owned by an old lady who never threw out her mail. She is believed to have died at least 10 years ago from laughing to hard an episode of Salute Your Shorts.

"We think it was that one with that red headed kid... What was his name? Sputnik? No... You know, the kid from the beginning of Terminator 2. Anyway, he sneaks a salami into camp with hilarious consequences. I've always enjoyed that one myself," Guzzle told us as we began slowly inching towards the door.

As far as future plans for the disc, the scientist plan to donate it to a museum after they're done laughing at it. So far many museums have been contacted, but none have returned their calls. << Home