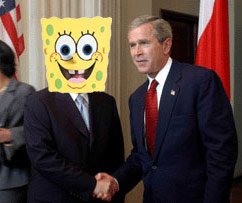 The national symbol, the bald eagle, has announced he stepping down from his post under George W. Bush.

The bald eagle declined to comment directly, but inside sources say the eagle plans to spend more time with his family now. He also plans to play his role in helping to get out of that whole endangered thing.

Bush is currently considering his dog Buddy and Spongbob Squarepants as possible replacements.