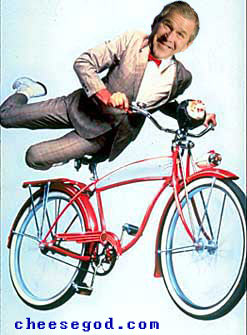 After 51% of America announced to the rest of the world they’re mentally retarded, the second term, first time elected, president spoke publicly about his plans for the future.

Kerry woke up yesterday morning to the realization that America was too worried about two dudes kissing to care about logic, he made the general “battle is lost, but the war is not over” speech. Bush, who always knew he’d win because Dick Cheney told him so, wasted no time continuing to make a fool of himself, telling the American public he was elected with a Mandate (in which you need 55% of the vote for). He also expressed concern over Illionois electing “Obama Sin Laden” to the senate.

Bush called a press conference and happily announced his plans for the future. Here are the highlights:

· Wars against Iran, Kuwait, France, North East America, and Melmac. Bush said he would not invade N. Korea because after the WWII stories his dad told him, he’s afraid of the Japanese.

· Reinstate the Draft. All men between the ages of 16 to 59 will be forced to join the army and fight someone or other. Bush insisted this isn’t a flip-flop, when he said there would be no draft he was referring to his bedroom, where he just finally had the windows shut.

· A Quadrillian Dollar Deficit. Because he wants to see what they’ll do when they run out of space on the counters in New York City.

· 90% tax cut for the rich. It’s trickle down economics at work.

· To read all the way through The Monster At The End Of This Book.

· Sleep, sit around, whatever…

When the press asked Bush what he thought American’s would say about these plans, Bush responded, “What the hell do I care? What are they going to do? Not vote for me?” Bush then got in his new “Presidential Bike” and rode off to Chuck-E-Cheese where he spent the rest of the day.

Meanwhile Kerry ripped off his lucky red tie, his lucky Boston Red Sox cap, and removed his lucky Springsteen guitar pick from his pocket and yelled at them; “You’ve betrayed me for the last time!” He then took a dump in a paper bag, set it on fire, and left it on John O’ Neil’s door step.