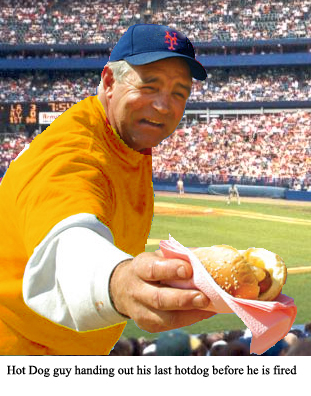 But, now 42 years and a Joe Orsulak later, the Mets are appearing to take action.
They’ve already announced the termination of current manger Art Howe and all his
coaches. The Mets are hoping to negotiate a deal with Lou Pinella, who’s proved he
can manage a losing team just as well as any ex-Mets manager can while with the Tampa
Bay Devil Rays.

But Mets are not stopping there. The Mets have fired Howe, but the Met’s are still
losing despite this (granted, that even though Howe was fired he still is managing
the team for some reason). So who else can they blame. Armando Benitez? Nope.
Already traded him the the Marlins where he’s having an All Star season. Maybe Bobby
Valentine? No, wait, he was the manager that Mets fans hated and demanded he be fired
despite actually producing a winning record with the team. Mo Vaughn? Good try,
Although he’s still on the payroll, Vaugn hasn’t actually played a game in over a
year due to being too fat to fit into his hummer and drive to the game. href=”http://www.news-leader.com/today/0921-Halftonman-183461.html”>You may have read
about him in the news recently. So who else? Mel Rojas? John Rocker? Dallas Green? Choo choo Colemon? Tim McCarver? George McClevane? Steve Phillips? Bob Apadaca? George W. Bush? Nope, all gone… well not Bush… yet… I don’t think we can blame this one on him anyway. Maybe Michael Moore can find a way.

There is one group of men who has stayed with the Mets throughout these losing times.
Are you thinking, “Owner Fred Wilpon, his idiot son in the front office, and Jim
Duquette the GM who traded away all of the young promising players for a beef
burrito?”

Nope, wrong! Then who? The Hot Dog vendors of course! Those damn people who walk
past you at the stadium every two seconds screaming, “HOT DOG! HOT DOG HERE!” It’s
there fault!

The Mets philosophy of the week is that the players won’t play well unless the fans
are cheering them on. The fans won’t cheer them on if they’re unhappy with there hot
dog service. Of course the Hot Dog vendors will argue that the reason they no longer
receive cheers is because most fans stopped showing up months ago and the few that do
show up have nothing to cheer about. Many fans don’t even buy hot dogs because they
can’t afford the $5 price tag after paying $50 for their ticket. Excuses, excuses.

So, as announced last night to distract the press from the Mets losing a game to the
last place Expos, all Hot Dog guys will be terminated at the end of the month. Mr.
Met, you’re next!