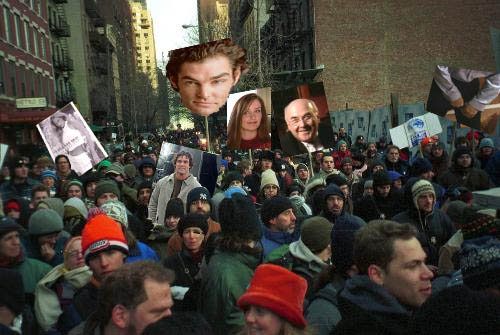 People gathered from around America last Saturday in New York City to protest the Joe Millionaire verdict. Protest organizers estimated that there was about 500,000 in attendance while cops said they didn’t care.

It was cold, it was wet, it actually was kind of stupid, but that didn’t stop the protesters from coming out.

“Well, the fact is it’s time Evan Marriot heard our voice,” said one protester who held a sign reading ‘Pick Me Joe,’ “He clearly should of chose Sara instead of Zora.”

The group marched up times square before getting lost.

“We could of swore FOX studios were around here somewhere,” said one confused guy.

The protesters finally wound up at NBC studios in Rockefeller Center and decided that it was close enough.

“They’re such morons,” said Conan O’ Brien looking from the window of his G.E. building, “how can anyone be that dumb. Except for my fans of course.” Conan then began to dance like an idiot and make weird high pitched “ow” noises for about an hour or two.

“They all look about the age of Joe Millionaire to me,” said one on looker who was urinating on a near by mailbox, “they’re probably just afraid of commitment.”

At the end of it all Evan Marriot finally responded only by saying, “I understand what they’re saying, but I respectfully disagree.”

But, since it’s a decision that doesn’t directly affect all those protesting, he has all the right to make it without listening to them. Now, if it was a far more serous decision, and that many people protested, no one in their right mind would just write it off…. right?