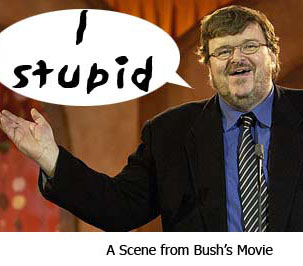 George W. Bush is retaliating against Michael Moore after years of silence. He’s fighting fire with fire by releasing his own movie as revealed in a White House press conference.

“The president has been working non-stop for the last couple of days on this movie,” Press Secretary Scott McClellan told reporters.

“Last couple of days?” questioned one reporter, “Shouldn’t he be working on finding a solution to all these bombs and deaths in Iraq?”

“The president is working because he feels it’s important for the country,” McClellan responded.

“But isn’t there more important things to work on,” asked another reporter, “Like the job economy, homeland defense, or even his presidential campaign?”

“The president feels this movie is important, and that is why he is working on it.”

It went on like that for an hour or two… I don’t know… I got bored and left to use the bathroom and when I returned everyone had mysteriously vanished. Although after a couple of minutes I realized I returned to the wrong room on accident and the press conference was still going on in the correct room. But this new room had one of those old ‘Magic Eye’ pictures in it and that kept me busy until my mom came to pick me up.

So far Bush’s film consists of crude drawings of Michael Moore by the president himself, most featuring stink lines, and the music video for “We built this City (on Rock N’ Roll) because Bush think it’s a “bitchin'” song.

He had also found footage of Moore eating out of a trash can, but it has been revealed to just be a partially shaved bear wearing a baseball cap.