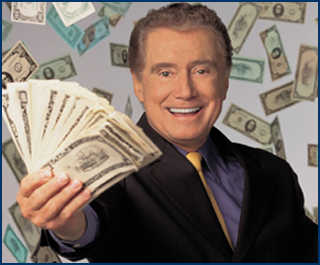 People in lines formed around Mann’s Chinese Theater in California are beginning
to get very excited. They’ve been waiting for months for what may be the biggest
movie of the year to open. Every person in the area only one thing on their
mind, we are just days away from the opening of Who Wants To Be A Millionaire? The
Movie.

Brian Burden, age 21, traveled all the way from Long Island, NY for the premiere
Thursday 12:01.

“Some people back home thought I was crazy. They just don’t get it. Millionaire
is a way of life. I was just talking about it to my friend PhilbinPhan32.. that’s
his screen name, I don’t know his real name…”

Burden told us he only has left the line twice during the last 6 weeks. Once to
pick up Final Fantasy Online and the other time to get the new line of
Millionaire Action Figures.

“I got all the cool ones. I got the “Excited Regis” figure, here’s the “Sitting
Regis” figure… I even bought the optional “Hot Seat” for him to sit in, not
that I ever will take him out of his package so he can actually sit on it. I
feel bad for him sometimes, it can’t be fun for him to spend his life inside that
plastic packing, but I’m sure it’s better for him inside there that in the real
world.”

He must of noticed by the look on my face that I thought he was a freakin’ weirdo
and he quickly changed the subject. Unfortunately the new subject wasn’t much
better.

“I’m actually really jealous of PhilbinPhan32, he got the rare “Pantsless Regis”
figure,” Burden told us.

Apparently there was a few action figures that had accidentally had the pants
painted flesh color, giving the illusion that Regis was not wearing pants.

With or without his perverted toy, Burden will is able to comfort himself in
knowing that he will be one of the first to see the movie. And in the end isn’t
that what life is really all about?