Eminem Out of Aliases for Next Album 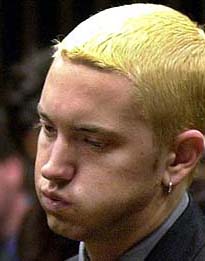 Less than months away, Eminem is ready for the release of his next album. Only problem is he has no title for it.

Eminem’s last three multi-platinum albums were titled the Slim Shady LP, The Marshall Mathers LP, and finally The Eminem Show. Every album has used another name he answer to. But after three, Eminem may have finally ran out of names to use. Does this mean Eminem will actually have to think of a title.

After thinking about it for a few months with no result, Eminem has started to ask family and friends for help. His mother has suggested the “Bitch Ass Son LP.” and his good friends on alt.music.heavy-metal suggested the “Slim Anus Album,” showing a lack of originality. His daughter Hailey suggested the “Daddy says bad words Album.” But none of these have satisfied Eminem.

Eminem has thought about mixing names to create a mixture of names, like “Slim Mathers LP,” or the “Shadymen EP.” But Mathers has finally decided he just needs another nickname. Expect to see Eminem calling himself by the new moniker of “White Chocolate” in upcoming interviews.