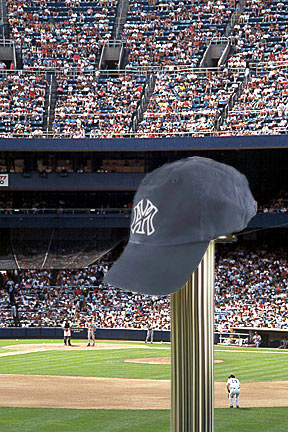 Yankee fans were hiding their heads and placing their jerseys in the closet with shame, as Mets fans often do, yesterday. It seems anyone associated with the Yankees in any way were deeply ashamed to admit so after the events of the last few days.

Everyone in the Yankee organization were celebrating just a few days ago when a trade with the Texas Rangers was successfully negotiated for “A Rod.” Unfortunately miscommunication occurred somewhere along the line and the team wound up getting an actual rod, instead of Alex Rodriguez, who goes by a similar nickname.

The Yankees have no choice to face the facts now that they traded away a good player, a potentially good player, and are going to waste a whole lot of of money on a rod that analysts are predicting to bat only .000 this year.

“Uh, oops,” said Yankee personnel Cashman, “I knew I should of read the agreement over before we signed it. I was just so giddy! I couldn’t contain myself.”

Steinbrenner, who experienced 3 heart-attacks after learning of the news (only two were because of the A-Rod fiasco, the other was because he has an extra large bowl of chili for breakfast that day) immediately demanded that his slew of henchman quickly negotiate another deal.

Mets and Red Sox fans celebrated, something they often don’t get to do, over the predicament. As the celebration ensued Yankee fans defended themselves the usual way by asking over and over what team won the most World Series ever. Met fans would respond by saying that they at least still have 1986, and then Boston fans would just break down, cry, shake their fists at the sky yelling, “Damn You, Bill Buckner!”

Celebrating was cut short soon because the Yankees and their endless supply of money and hitman were soon able acquire the real Alex Rodriguez and paraded him in front of the media much like they did when signed King Kong back in the ’30s. That acquisition of course went sour when Kong broke loose and climbed the Empire State Building, in the first act of terrorism that lead to the false justification for World War II. This lead to the Yankees having to quickly fill in the hole in their line up with Babe Ruth. But I must stop with this story now, as I’m sure I’m causing more Red Sox fans to cry.