The search is over! After weeks of grilling Saddam Hussein, he has finally
unveiled where he has put the weapons of mass destruction. eBay!

Pentagon official celebrated as they entered the words “weapons of mass
destruction” into the ebay search box and did indeed come up with the desired
result. 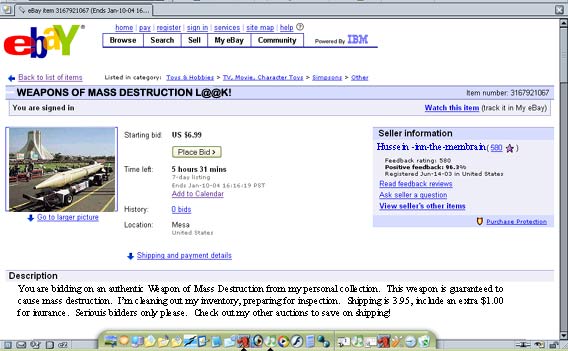 Asked if the white house planned on bidding on the item, Rumsfeild responded no.
Apparently the White House’s Paypal budget has already been spent for the year
by Bush on a Alf sock puppet.

Mr. Rumsfeild told us not worry though because the current high bidder in some
guy named “Al Keida” and that once he wins the item America will just bomb his
house and “free” the people that reside within.

Experts suspect latest Hussein tape may not be real

Hussein Responsible for deaths of Tupac and Biggie

101 Uses for the Harry Potter Book

They Call Me Your Mom